Norwegian continues to expand its route network from London Gatwick by launching two new routes to Warsaw and Berlin. In addition it increases the number of daily departures to Copenhagen.

From mid-September, Norwegian will offer six weekly flights from Gatwick to Warsaw and Berlin. The airline also increases the number of flights between London Gatwick and Copenhagen from four to five daily departures.

Norwegian established its first UK base at Gatwick in May 2013. During the first quarter of 2014, Norwegian had a market share of 10 percent at London Gatwick Airport. Today, the company operates 375 weekly flights and 33 routes to and from the airport. 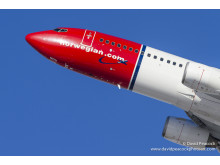