- Ancillary revenue per passenger up 4 % in the fourth quarter.

Norwegian Air Shuttle ASA, commercially branded “Norwegian,” is a public low-cost airline noted on the Oslo Stock Exchange. The company is the second largest airline in Scandinavia, and has a route portfolio that stretches across Europe into North Africa and the Middle East. With competitive prices and customer friendly solutions and service, the company has experienced significant growth over the previous years. With more than 13 million passengers in 2010, Norwegian is the 3rd largest low-cost airline in Europe. Norwegian currently operates 54 aircraft on 244 routes to 97 destinations and employs approximately 2 000 people. 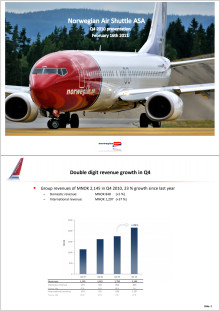 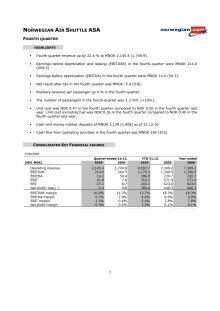