Norwegian, Gatwick’s third largest airline by passenger numbers, has flown Gatwick Airport’s 40 millionth passenger on its brand new flight to San Juan, Puerto Rico. In light of the airport’s significant milestone, the lucky passenger has received two return tickets on Norwegian’s inaugural flight to Boston next May and £100 worth of Norwegian Reward CashPoints to celebrate.

Puerto Rico became Norwegian’s latest destination from Gatwick last week as the airline’s long-haul operation continues to contribute significantly to its huge growth in the UK, flying a record 3.2 million passengers from Gatwick in the past year alone.

Thomas Ramdahl, Chief Commercial Officer at Norwegian said: “We congratulate Gatwick for achieving this major milestone. Gatwick is our UK base and with a record 40 million passengers travelling through the airport, proves there is still growing demand for air travel. Norwegian’s expansion in the UK is taking off so it’s very special to have one of our loyal customers rewarded on this momentous occasion. As such, we are delighted to offer free flights to our latest destination Boston along with £100 worth of CashPoints which provide cost savings during travel thanks to one of the most generous loyalty programmes in the skies, Norwegian Reward.”

Norwegian has been granted a UK Air Operator’s Certificate and Operating License which will unlock potential new routes to Asia, South America and Africa. Norwegian UK will be located at London Gatwick where the airline is already the third largest carrier with 10 aircraft and more than 400 short-haul and long-haul crew and pilots. 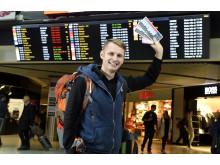