Norwegian is the first airline to offer high-speed broadband on flights within Europe. The Scandinavian airline launched its new service yesterday.

“Norwegian is proud to be the first airline to offer wireless internet access on board flights in Europe. It is satisfying to be able to give our passengers the opportunity to work, read online newspapers, play games or watch online TV while flying with us. This is a product that no other airline in Europe is currently offering, which gives us a huge competitive advantage,” said Director of IT and Business Development, Hans-Petter Aanby, at Norwegian.

All new aircraft with WiFi
The aircraft have an antenna, which communicates with a satellite, mounted on the fuselage. Inside the aircraft, there are two separate networks, one that is open for passengers and one for pilots and cabin crew that will make their work in the air easier and more efficient.

All of Norwegians new Boeing 737-800 aircraft will be equipped with this technology. Norwegian's 737-300 aircraft are being phased out continually and by the end of 2012 Norwegian will have a unitary fleet of 737-800s, making one of Europe's newest, most cost-effective and environmentally friendly fleets with an average age of 3 years.

Norwegian has selected the U.S. company Row 44 as the supplier of its WiFi system. The company currently supplies the same technology to Southwest Airlines.

Norwegian Air Shuttle ASA, commercially branded “Norwegian,” is a public low-cost airline noted on the Oslo Stock Exchange. The company is the second largest airline in Scandinavia, and has a route portfolio that stretches across Europe into North Africa and the Middle East. With competitive prices and customer friendly solutions and service, the company has experienced significant growth over the previous years. With more than 13 million passengers in 2010, Norwegian is the 3rd largest low-cost airline in Europe. Norwegian currently operates 54 aircraft on 238 routes to 95 destinations and employs approximately 2 000 people. 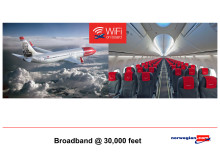 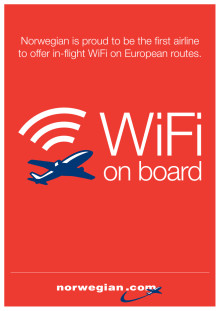