Norwegian today marks five years of operating long-haul flights at London Gatwick which has transformed the transatlantic market and benefitted UK consumers with lower fares. To mark the occasion, Norwegian is launching a special four-day sale from 4 - 8 July 2019 on all long-haul routes to the USA, Brazil and Argentina in economy and Premium at www.norwegian.com/uk/offers/flash-sale

Voted Skytrax 2019 Best Low-Cost Long-Haul airline, Norwegian has placed London Gatwick at the heart of its long-haul operation, where the airline flies more than 1.5 million passengers each year to 11 US cities, Buenos Aires and Rio de Janeiro. July 2014 marked the start of Norwegian’s long-haul expansion into the USA from London Gatwick with its first US route to Los Angeles on 2 July 2014, quickly followed by new routes to New York JFK and Fort Lauderdale in the same week.

In celebration of five years of long-haul operations at the airport, Norwegian is giving consumers the chance to book flights at a 15 per cent* discount from Gatwick to all USA destinations, Buenos Aires and Rio de Janeiro in economy and Premium.

Customers must enter campaign code: 5YEARS to apply a 15 per cent* discount for travel between 1 September 2019 – 31 March 2020, excluding the blackout period16 December 2019 – 9 January 2020. Flights are subject to availability and the discount is applicable to LowFare, LowFare+ and Premium* tickets.

Bjorn Kjos, CEO at Norwegian said:“We saw an opportunity five years ago to bring low-cost long-haul to London Gatwick and really make positive changes to the transatlantic market. Since then, many carriers have been forced to raise the bar and lower fares to compete with us which proves we have unlocked a viable market.

“Consumers today are now better off as we’ve given millions of people the opportunity to travel to the USA and beyond, while maintaining exceptional levels of quality and service on board modern aircraft that reduce our impact on the environment.

“I would like to thank Gatwick Airport and my dedicated colleagues for supporting the first five years of our long-haul growth and ensuring that Norwegian can continue to build on this solid foundation to make low-cost long-haul a success in the future.”

Stewart Wingate, CEO at Gatwick Airport said: “The five years since Norwegian launched its first transatlantic route from Gatwick have seen the airport experience a low-cost long-haul revolution. Spearheaded by Norwegian, the number of low-cost long-haul routes available from Gatwick has quadrupled since 2014, and the number of passengers travelling on these routes has grown by 43 per cent in the last year alone. Indeed, one in five of our passengers are now long-haul travellers.

“Making the world’s most exciting destinations accessible to more Gatwick passengers than ever before, and significantly boosting trade and tourism opportunities for our local area, have been some of the airport’s biggest successes in recent years. We’re looking forward to working with Norwegian and other carriers in the future to continue the meteoric growth in global connections that has made Gatwick such a vital piece of infrastructure for local communities and the UK as a whole.”

Gatwick has fast become a strategic long-haul hub in Norwegian’s global network that fosters connectivity and direct services for passengers to around 150 global destinations.

Norwegian has grown its London Gatwick base to more than 1,500 pilots and cabin crew today. The airline’s UK subsidiary, Norwegian UK, is based at Gatwick and its fleet comprises the airline’s newest Boeing 787-9 Dreamliner aircraft deliveries. These aircraft have an average age of six months and are the most environmentally friendly aircraft serving Gatwick.

The airline commenced the rollout of free and premium high-speed Wi-Fi on its 787 Dreamliners this year that allows Gatwick passengers to be the first in the world to experience free Wi-Fi for the full duration of long-haul flights. Norwegian’s newly launched gate-to-gate Wi-Fi service provides customers with connectivity the moment they step on board Wi-Fi enabled 787 Dreamliners.

*15% discount of the net fare. Fares in this promotion are based on the lowest one-way fare with departure from London Gatwick (LGW), incl. taxes and charges.

*PremiumFlex tickets are excluded from the promotion 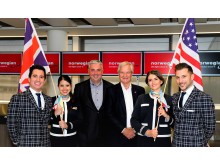