Norwegian is this week celebrating the 2nd anniversary of its unique low-cost long-haul flights from the UK to the U.S.

Norwegian first launched transatlantic flights from Gatwick Airport to three U.S destinations in July 2014, with the aviation industry divided on whether the ‘low-cost long-haul’ venture would succeed.

Two years later, and Norwegian’s long-haul operation is already profitable and now plays a key role in the airline’s continued passenger growth. Norwegian is still the only airline offering UK passengers direct low-cost transatlantic travel - the airline’s long-haul network from the UK has now grown to 8 US destinations with over 650,000 UK passengers and more than 800,000 flights on sale this year.

Along with low-cost long-haul flights to the U.S, Norwegian has also now obtained a UK Operating License, allowing the airline to access to key bilateral traffic rights to other markets. With the UK licence, Norwegian has the long-term ambition of establishing a seamless global operation, using the same aircraft on both U.S. and other long-haul routes to destinations such as Asia, South Africa and South America.

Norwegian CEO Bjorn Kjos said: “After 2 years of new routes, full planes and extra flights, UK passengers have shown the huge demand for affordable long-haul travel.Our low-cost long-haul flights are now the driving force behind Norwegian’s growth but this is only the beginning. We will continue to offer passengers affordable transatlantic flights, with new routes and increased flights from the UK, but in the future we also have ambitious plans to spread our long-haul wings into other global destinations.”

Gatwick Airport CEO Stewart Wingate said: “Norwegian’s low cost long haul success story just goes from strength to strength. In just two years Norwegian has almost trebled the US destinations it serves from Gatwick, with well over half a million passengers benefiting from the affordable prices on offer. We welcome Norwegian’s ambitious plans to base 50 new long haul aircraft at an expanded Gatwick, which would revolutionise the market yet again. Passengers would be able to choose from a huge range of new destinations around the globe at prices never seen before in the UK.” 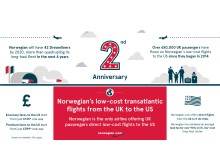 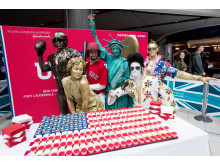 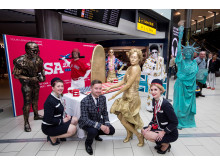