Production growth, high load factor and increased passenger growth had a positive effect on Norwegian’s February traffic figures. The company carried almost 1.9 million passengers this month, an increase of 15 per cent compared to February last year. The load factor was 85.6 per cent, up 0.8 percentage points.

In February, Norwegian carried 1,871,396 passengers, an increase of 15 per cent compared to the same month previous year. The total passenger traffic (RPK) increased by 20 per cent and the total capacity (ASK) increased by 19 per cent.

Norwegian CEO Bjørn Kjos said: “We are very pleased that we have attracted more new business- and leisure travelers this month. The growth is primarily due to international expansion, particularly our intercontinental operation. Domestic flights in Spain and the routes between the French Caribbean and the U.S. East Coast are also preforming well. Demand in the Nordic region is good and stable.”

The company’s first of 30 new and bigger Boeing 787-9 Dreamliners entered the fleet this month. Norwegian will take delivery of four such aircraft in 2016. A brand new Boeing 737-800 also entered the fleet in February, the second of 17 this year. With an average age of 3.6 years, Norwegian’s fleet is one of Europe’s newest and most environmentally friendly.

Norwegian operated 99.7 per cent of its scheduled flights in February, whereof 79.5 per cent departed on time. 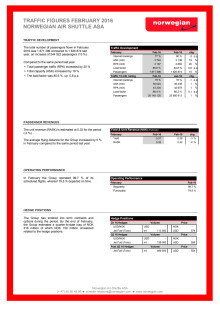