Norwegian carried more than 1.6 million passengers in February 2015, an increase of seven percent compared to the same month last year. The load factor was 84.8 percent in February, up 5.5 percentage points.

In February, 1,626,874 passengers flew with Norwegian. This is an increase of seven percent compared to February 2014. The total passenger traffic (RPK) increased by 17 percent and the total capacity (ASK) increased by nine percent this month. The load factor was 84.8 percent in February, up 5.5 percentage points.

The traffic growth in February is due to expansion in the European market and growth in Norwegian’s long-haul operations. However, the strike among Scandinavian pilots organized in Parat/Norwegian Pilot Union has led to a decline in ticket sales for March, especially on domestic routes in Scandinavia.

“2015 got off to a good start until the pilot strike hit us, which has influenced our traffic figures. The situation is deeply regrettable. Although our traffic is running as normal on our long-haul operation and from our bases outside Scandinavia, the strike still affects the entire company,” says CEO Bjørn Kjos. 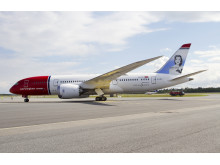 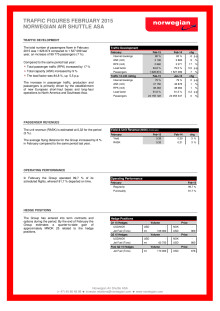