Norwegian is taking off the new year by upgrading the passenger experience for long-haul customers with the introduction of inflight Wi-Fi on its growing long-haul fleet of aircraft.

Voted Skytrax 2018 World’s Best Low-Cost Long-Haul Airline, Norwegian became the first carrier to offer free Wi-Fi on all European routes in 2011 and the first European airline to successfully offer live television in the skies in 2015. Since 2013, Norwegian has rapidly grown to become a leading long-haul airline offering more than 60 long-haul routes between Europe, the USA, South America and Asia serviced by modern, state-of-the-art, fuel-efficient aircraft.

Norwegian customers flying between Europe, USA, South America and Asia will be able to stay connected in the skies with the rollout of free and premium high-speed Wi-Fi connectivity on the carrier’s Boeing 787-9 Dreamliner and 737 MAX aircraft.

More than 50 per cent of Norwegian’s 787-9 Dreamliner fleet is expected to offer in-flight connectivity by 2020. The rollout of Wi-Fi on the airline’s Boeing 737 MAX aircraft will commence from mid-January 2019.

Norwegian economy and Premium customers on the Boeing 787-9 Dreamliner and 737 MAX will have the choice of two inflight Wi-Fi packages:

The Basic option is free and will allow customers to browse the web, stay-up-to-date on social media, send and receive emails and instant messages with friends, family and colleagues by using their personal mobile phones, tablets and laptops on board for the full length of the flight.

Fast enough to stream music, movies and television shows on Netflix, YouTube and Hulu among others, Norwegian will offer passengers a Premium high-speed Wi-Fi option.

Premium high-speed Wi-Fi will be available at an introductory price of $14.95 USD / €12.95 EUR for a three-hour package.Customers can select their preferred currency when choosing the Wi-Fi package.

“Millions of Norwegian customers have already enjoyed free Wi-Fi over the skies of Europe and now long-haul passengers can continue to rely on free and high-speed internet connectivity that will enhance and personalise their journeys.

“From being the first European airline to launch free Wi-Fi on all short-haul flights followed by free live television, Norwegian’s rollout of high-quality inflight broadband services will offer business and leisure travellers even greater value at affordable fares.”

Passengers willreceive a fast experience using the wireless inflight connectivity platform, CabinConnect™ by Collins Aerospace. Passengers will have highly secure access to internet content through CabinConnect including their favourite shows, inflight map and voice and messaging services through their devices.

LeAnn Ridgeway, Vice President of Information Management Services at Collins Aerospace said:“We are collaborating with Norwegian to achieve their vision of optimising their aircraft and enterprise operations to address both cabin and flight deck requirements, as well as adding new capabilities for the future.”


Inflight Wi-Fi works via an antenna fitted to each aircraft fuselage which communicates with Inmarsat’s GX satellite network.

-Premium high-speed Wi-Fi is based on an introductory price, subject to changeat various stages during the programme as Norwegian analyses usage based on route, seasonality and market.

Norwegian operates a fleet of around 160 aircraft with an average age of 3.7 years, one of the "greenest" and most fuel-efficient fleets in the world. Norwegian was voted Skytrax 2018 Europe’s Best Low-Cost carrier and World's Best Low-Cost Long-Haul airline. Norwegian is listed on the Oslo Stock Exchange and has around 11,000 employees based in Europe, Asia, the U.S. and South America.

Collins Aerospace, a unit of United Technologies Corp. (NYSE: UTX), is a leader in technologically advanced and intelligent solutions for the global aerospace and defense industry. Created in 2018 by bringing together UTC Aerospace Systems and Rockwell Collins, Collins Aerospace has the capabilities, comprehensive portfolio and expertise to solve customers’ toughest challenges and to meet the demands of a rapidly evolving global market. For more information, visit CollinsAerospace.com. 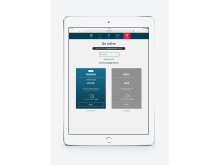