Low-cost airline Norwegian is giving passengers an early Christmas present with the launch of the UK’s cheapest flights to San Francisco - fares from London Gatwick to San Francisco Oakland are now on sale starting from £199 one way.

Norwegian is the only airline to offer UK passengers direct low-cost flights to the US and Caribbean - flights currently operate from London Gatwick to New York, Los Angeles, Orlando, Fort Lauderdale and Puerto Rico, all using Norwegian’s state-of-the-art 787 Dreamliner aircraft.

The ground-breaking low-cost transatlantic flights continue to prove popular with UK passengers and due to passenger demand, further flights now on sale at www.norwegian.com include:

Norwegian CEO Bjørn Kjos said: “Launching the UK’s cheapest flight to San Francisco is a great addition as our low-cost transatlantic plans continue to grow. From the East Coast to the West Coast, our ground-breaking flights are creating a new market for low-cost travel to America. We look forward to adding San Francisco to our network from London Gatwick as we continue our exciting plans for UK growth.”

“With 12 new long-haul routes starting in 2016, adding to the over 220 destinations that the airport serves, Gatwick continues to reflect the requirements of our travellers providing them with more choice, better value and a greater variety of destinations.”

Norwegian is now the third largest airline at London Gatwick, offering a total of 29 flights to Europe and seven long-haul flights to the US and Caribbean. More than 350,000 passengers have flown transatlantic with Norwegian since the long-haul network was launched in July 2014.

How Norwegian has grown in the UK:

- April 2013: Norwegian establishes its first UK base at London Gatwick. More than 400 long-haul and short-haul crew and pilots are now based at the airport

- Summer 2015: Norwegian sees its busiest ever summer in the UK with over one million passengers between June and September and over 500 flights per week to and from UK airports

- November 2015: Norwegian launches the UK’s only direct route to Puerto Rico. The new route from Gatwick will offer UK passengers low-cost travel to the Caribbean for the first time

- November 2015: Further expansion at Birmingham and Edinburgh Airports with new flights to the Canary Islands. At Birmingham in particular, Norwegian has launched 5 new routes in less than a year making it one of the airport’s fastest growing airlines

- March 2016: Boston will be added to Norwegian’s low-cost long-haul network, becoming the fifth US destination served from the UK

- May 2016: San Francisco will become Norwegian’s sixth low-cost US destination

- 2017: Norwegian will be the European launch customer of new generation Boeing 737 MAX8 aircraft making it possible to connect smaller cities in the UK with destinations in the U.S. 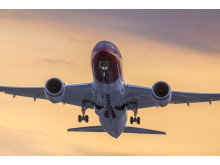