Low-cost airline Norwegian and UNICEF will send an aircraft fully loaded with emergency aid and school supplies to help Syrian children living in refugee camps. A series of initiatives are underway allowing UK passengers to make a donation.

In November, Norwegian’s UNICEF aircraft will take off for Amman, Jordan, a couple of hours’ drive from one of the largest refugee camps on the Syrian border. The initiative between Norwegian and UNICEF is aimed at helping some of the two million children affected by the brutal civil war in Syria.

Norwegian CEO Bjorn Kjos and several employees will join the emergency aid flight, and passengers in the UK are also being encouraged to make a donation.

The goal of the flight is that every seat, every cabin compartment and every spot of cargo space is filled with school supplies, medicines and other life-saving supplies. A “Help us fill a plane!” website has now been launched allowing UK passengers to make a donation at https://www.unicef.no/fly

UK passengers flying from Norwegian’s four UK airports (London Gatwick, Birmingham, Manchester and Edinburgh) to destinations including Greece, Sicily, Cyprus and Hungary can also carry aid in a separate bag of up to 25kg for free. Passengers are also able to make a donation when booking their flights online with a simple click allowing them to donate £3, £5, £10 or £15 – the initiative has already raised more than £75,000.

Norwegian CEO Bjørn Kjos said: “We are eager to help the refugee children of Syria and our partnership with UNICEF is allowing us to provide aircraft and crew to carry emergency aid and school supplies. This is an important cause and we encourage all of our passengers and customers to make a donation to help prevent a lost generation of Syrian children.”

Represented in more than 190 countries around the world, UNICEF is the world’s leading humanitarian and development agency working for the rights of every child. Both in Syria and neighbouring countries, the organisation has a responsibility to give children temporary educational facilities and creating safe areas for them where they can play and be treated for possible traumas. The goal is that Syria's children will one day be able to support themselves and rebuild communities as pillars of a new Syria.

UNICEF Norway's Secretary General, Bernt G. Apeland said: “The refugee children of Syria have lost everything. Therefore, it is great that we, together with our long-term partner Norwegian can use the public’s generosity to fill a plane with aid that goes directly to children in need. Together we can make sure these children get the future they deserve and that we prevent a lost generation.”

Norwegian and UNICEF have had a signature partnership since 2007. Norwegian supports UNICEF with campaigns and travel support. Norwegian’s employees support UNICEF by donating their annual Christmas present to the organization. Last year, Norwegian and UNICEF cooperated on a relief flight to Bangui in the Central African Republic – view video at https://www.youtube.com/watch?v=GwAobVVVy3c 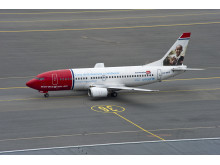 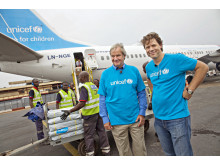