Norwegian has provided an aircraft and crew to fly school supplies and emergency aid to the refugee camp Za’atari, located by the Syrian border in Jordan. Norwegian and UNICEF have also made joint efforts in a fund raising campaign where Norwegian’s passengers and UNICEF members could make donations to help fill up the aircraft with emergency aid. The goal of raising £ 130,000 has been reached in order to fill the aircraft’s cargo, overhead bins and all seats with emergency aid.

The UNICEF aircraft took off from Oslo on Monday morning with a stopover in Copenhagen where the aircraft was loaded with emergency aid from UNICEF’s Supply Division Warehouse. The flight is now on its way to Amman, the capital of Syria’s neighbouring country Jordan.

Norwegian CEO Bjørn Kjos said: “I would like to thank our passengers and colleagues at Norwegian for their contribution to help UNICEF’s work for Syrian refugee children. UNICEF and Norwegian’s common goal has been to fill every available space on board the aircraft with vital equipment. We have been able to do that today.”

UNICEF is the world’s largest children’s humanitarian organisation aiming at helping children towards a better future. UNICEF is looking to provide children with temporary educational facilities both in Syria and neighbouring countries, as well as creating safe areas for them where they can play and be treated for possible traumas. The goal is that Syria’s children will one day be able to support themselves and rebuild communities as pillars of a new Syria. To prevent a lost generation it is vital that these children get school education.

UNICEF Norway’s Secretary General, Bernt G. Apeland said: “The refugee children of Syria have lost everything. Therefore, it is great that together with our long-term partner Norwegian we have managed to engage people to help us fill a plane with emergency aid that goes directly to these refugee children. Together we can contribute to help these children get a better future and get some of their childhood back.”

The Norwegian crew on board the flight represent a range of different nationalities but what they all have in common is a strong engagement in the Syrian crisis and the many refugees it has triggered. The First Officer and the Cabin Chief that are on board the flight both have a refugee background.

“I am a refugee myself and it warms my heart that so there are so many people who want to make a contribution. I am convinced that this trip will bring back memories and I am not sure how I will react.”

“To me this is not only the most important flight of the year, but also the most important in my career. My family flew from Syria so I feel like I have a lot in common with these children. I think it will be difficult to meet their eyes but I truly look forward to help them.”

UNICEF is present in more than 190 countries around the world and has a big presence in Syria’s neighbouring country Jordan. Norwegian and UNICEF have had a signature partnership since 2007. Norwegian supports UNICEF with campaigns and travel support. Last year, the emergency aid flight flew to the Central African Republic (CAR), where 2.3 million children suffer and are in need of immediate help.

It is still possible for passengers to contribute at the campaign site - www.unicef.no/fly. Follow the flight at Norwegian and UNICEF’s Facebook pages this week.

Thanks to our partners Menzies and WFS who voluntarily helped load the aircraft. 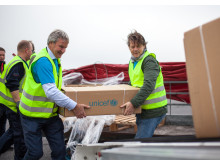 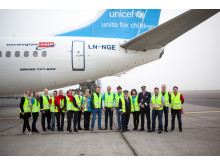 Group image of UNICEF and...