Norwegian is proud to announce that Crean Family Expedition Ale has been added to the skies, produced by the Crean family in honour of renowned Irish explorer Tom Crean. The Irish Red ale is now available for passengers to purchase on all transatlantic flights from Ireland and Northern Ireland to the US East Coast.

In 2016, in conjunction with Torc Brewery, Killarney Tom Crean’s granddaughter Aileen produced a fine craft Irish Red Ale in honour of Tom. The Crean Family Expedition Ale has been named after not just Tom’s time in the Antarctic and his three expeditions (Discovery Terra Nova and Endurance), but also when his granddaughter along with his two of his great grandchildren recreated Tom’s epic crossing of South Georgia with Shackleton and Worsley in 2016 to celebrate the centenary of this expedition.

Passengers can now enjoy the Crean Family Expedition Ale, Irish Red 330ml on all transatlantic flights from Cork, Shannon, Dublin and Belfast for €5 ($6).

Since Norwegian’s first aircraft took to the skies, the airline has always honoured iconic figures on the tails of its aircraft, using personalities who symbolise the spirit of Norwegian by pushing boundaries, challenging the norm and inspiring others. Earlier this year Tom Crean was announced as Norwegian’s first Irish tail fin hero, with his image taking to the skies this summer on the new transatlantic routes from Dublin, Cork, Shannon and Belfast.

Norwegian’s Chief Commercial Officer Thomas Ramdahl said: “We are delighted to be able to offer our passengers Tom Crean’s Expedition Ale Irish Red on all transatlantic flights from Ireland and Northern Ireland. Passengers can now enjoy the ale on their journey to the States, all while enjoying the comforts of our brand-new aircraft.”

The Crean family said: “Our Grandfather was not only an explorer but when he retired from the British Royal Navy achieved yet another personal goal and became a publican. For this reason, we felt it was appropriate to produce a red ale "Expedition Ale" in honour of his three expeditions (Discovery, Terra Nova and Endurance) and a centenary expedition to South Georgia in 2016 by one of his granddaughters and two of his great grandchildren. This exclusive beer is produced by the Crean Family and we are delighted passengers will be able to enjoy our Irish Red on board Norwegian flights and to raise a toast to an extraordinary, inspirational and humble Irishman.” 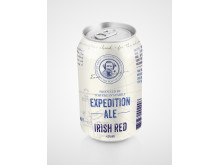