Norwegian (NAS) has today signed an agreement with both Airbus and Boeing for delivery of a total of 222 new aircraft. The order includes 122 aircraft from Boeing; 100 of the new Boeing 737 MAX8 and 22 Next-Generation 737-800. Norwegian will be the European launch customer for Boeing’s new aircraft. The Airbus order includes 100 Airbus A320neo. The total agreement is the largest ever in European aviation history and has a contract value at list prices of NOK 127 billion. The order includes additional purchase right of 150 aircraft from both manufacturers.

The agreement with Boeing includes firm orders for a total of 122 aircraft; 100 Boeing 737 MAX8 and 22 Boeing Next-Generation 737-800, in addition to purchase rights for an additional 100 737 MAX8. Norwegian has also signed an agreement with Airbus which includes firm orders of a total of 100 Airbus A320neo as well as purchase rights for an additional 50. This marks Norwegian’s first aircraft purchase from Airbus. The total agreement is the largest ever in European aviation history and is the largest single investment in Norway, even on level with the largest investments in the Norwegian offshore industry. The firm order has a contract value at list prices of approximately NOK 127 billion. The deliveries of the new aircraft types start in 2016.

"Today is a historic day for Norwegian. The order is the largest ever in European aviation history and marks a major milestone in the company’s 10 year history. We have secured our fleet renewal for years to come and are very pleased with the agreements with both Airbus and Boeing,” said CEO Bjørn Kjos at Norwegian.

“Norwegian has now reached a size where we will benefit from having two suppliers, both in terms of ensuring adequate flight capacity, flexibility and competition between two manufacturers,” said Kjos.

"International air traffic will keep on growing in the years ahead and Norwegian is determined to be a strong, stable and attractive player in the airline industry. We will continue to provide our customers with quality at a low fare and live up to our vision that everyone should afford to fly. The new aircraft are win-win for our passengers, the environment and the company's costs. As we intend to replace every aircraft after seven years of operation, it is mandatory that we plan at least 10 to 20 years ahead. We will sell or rent out our older aircraft in order to keep a young fleet”.

“Norwegian’s order of 42 new Boeing 737-800 aircraft in 2007 was by many viewed as a bold investment. History has, however, shown that it was a necessary move to ensure our competitiveness and reduce costs. This order has been extended several times since 2007, proving that our need for aircraft has been far greater than we anticipated five years ago,” said Kjos.

“We are very pleased to welcome Norwegian as an all-new Airbus customer. Their A320neo commitment is a further demonstration of the undisputable success of the A320neo’s record-setting credentials. The A320neo sets new industry standards for eco-efficiency and passenger appeal,” said John Leahy, Chief Operating Officer, Customers.

The Airbus A320neo will be an entirely new aircraft type for Norwegian. “Neo” is short for «New Engine Option» and as with the MAX8, it features an enhancement of an already existing aircraft type, primarily by adding more efficient engines. The NEO will have 15 % lower fuel burn than the present A320.

“Norwegian is a Valued Boeing Partner”

“Norwegian has become one of the largest 737 operators in Europe and has been a valued Boeing partner since the airline was established”, said Boeing Commercial Airplanes Vice President Sales, Europe, Aldo Basile.

“Since it began operating in 2002, Norwegian has achieved tremendous success with its low cost model, providing significant value to both its passengers and shareholders. Improved financial performance and improved environmental performance go hand in hand as fuel burn is lowered. We're really pleased to provide this great performance to Norwegian."

Norwegian Air Shuttle ASA will be the European launch customer for the new Boeing 737 MAX8. The aircraft is the successor of the 737-800 and will give a 10-12% reduction in fuel burn over its predecessor. Compared to a 737-800 built in 2001, the fuel reduction is 15 to 20 percent, a huge advantage to the environment and the company’s costs.

Norwegian Air Shuttle ASA, commercially branded “Norwegian,” is a public low-cost airline noted on the Oslo Stock Exchange. The company is the second largest airline in Scandinavia, and has a route portfolio that stretches across Europe into North Africa and the Middle East. With competitive prices and customer friendly solutions and service, the company has experienced significant growth over the previous years. With more than 13 million passengers in 2010, Norwegian is the 3rd largest low-cost airline in Europe. Norwegian currently operates 61 aircraft on 297 routes to more than 100 destinations and employs approximately 2 500 people. 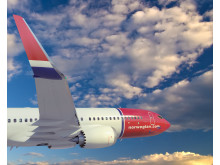 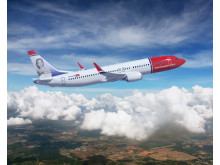 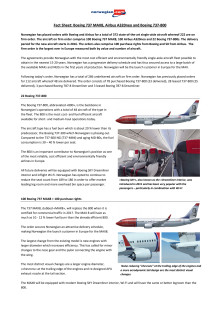