Passenger growth and solid load factors characterize Norwegian’s traffic figures in August. More than 2.5 million customers flew with the airline this month and the load factor was close to 90 percent. Increased long-haul traffic and holidaymakers in the UK and Europe contributed to the positive traffic figures.

Norwegian carried 2,566,179 passengers in August, an increase of 9 percent compared to the same month previous year. The total passenger traffic (RPK) increased by 9 percent while the capacity (ASK) increased by 1 percent this month. The load factor was 89.7 percent, up a solid 6.1 percentage points from the same month last year. 97 percent of the long-haul seats were filled in August.

“Holidaymakers in the UK and Europe contribute positively to this month’s traffic figures. I’m very pleased that an increasing number of customers in the UK, Germany, Spain and the US choose Norwegian’s high quality flights at affordable fares. It proves that the company is even better equipped to meet the tough international competition going forward,” said CEO Bjørn Kjos.

The company took delivery of two brand new Boeing 737-800 aircraft in August, of a total of ten in 2015. With an average age of about four years, Norwegian’s fleet is among the most modern and environmentally friendly in Europe. Norwegian also entered into an agreement to acquire two new Boeing 787-9 Dreamliners in August with delivery in 2017. By 2018, Norwegian will have a fleet of 19 long-haul aircraft. 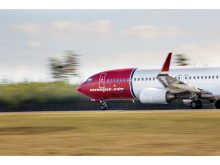 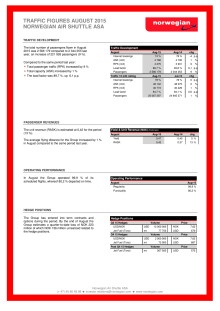