Norwegian (NAS) today reported its first quarter 2013 results. The company improved its result (EBT) by 238 MNOK compared with the same quarter previous year. It is one of the best first quarters in the company’s history. The quarter is also characterized by solid traffic growth and international expansion.  Not least the company also reduced its costs considerably, boosting its competitive power in an international industry with tough competition.

The total revenue in the first quarter was 2.9 BNOK, up 23 percent from the same quarter previous year. The result (EBT) was -160 MNOK, an improvement of 238 MNOK compared to first quarter 2012.The company carried 3.9 million passengers, a total growth of 8 percent. The company’s RPK was up as much as 19 percent, which relates to each passenger flying considerably longer distances than last year.

The figures also show a solid ASK growth of 21 percent. The load factor in this quarter was 76 percent, down 1 percentage point from the same quarter last year.

The company’s costs (CASK) were reduced by 8 percent, both including and excluding fuel. The main cost reducing factors are the establishment of new European bases and the delivery of brand-new Boeing 737-800s. So far this year, Norwegian has taken delivery of six such aircraft. In April, Norwegian opened a new base at London Gatwick and launched 14 new routes to several Mediterranean destinations as well as popular cities on the European continent. The company also opened a new base in Alicante, Spain, in March.

Due to the delivery of brand-new aircraft, the launch of new routes and the start of long-haul flights in May/June, Norwegian’s total ASK growth is expected to be in excess of 25 percent this year.

“We’re very satisfied with the first quarter results, particularly since we in a seasonally weak quarter for many airlines improved our result by 238 MNOK. The load factor remains stable, even with a considerable capacity growth. At the same time we’re cutting our costs considerably, which is a crucial step to staying competitive in an international industry. Moreover, it is gratifying that our growth enables the creation of jobs in several markets, also outside of Scandinavia. Our strategy of cost reduction and international growth is also mandatory to secure all the jobs we’ve already created in Scandinavia,” said CEO Bjørn Kjos. 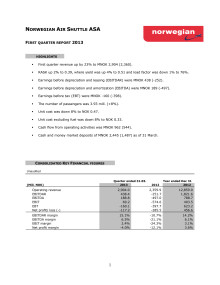