Today, Norwegian's CEO Bjørn Kjos will call on the U.S. Department of Transportation (DOT) to once and for all approve the application for a foreign air carrier permit for the company’s Irish subsidiary Norwegian Air International (NAI) in a speech in Washington D.C.

“We are doing exactly what the Obama administration wants: create American jobs, bring tourists to the United States and offer Americans cheap flights. The transatlantic market has far too long been dominated by alliances that have been allowed to rule the market with high prices and limited choice,” says Bjørn Kjos.

Norwegian’s CEO will address why it is high time that the U.S. government approves Norwegian’s EU-based long-haul company’s application for a foreign air carrier permit, which received its Irish Air Operator’s Certificates (AOC) in February. The application for an American air carrier permit has been under consideration ever since and has been vigorously opposed by competitors and unions.

NAI meets all statutory and regulatory requirements to fly to and from the USA. Norwegian Air Shuttle currently operates the routes between Europe and the USA. The main reason why Norwegian has established a long-haul company in Ireland is to gain access to traffic rights in the EU, since Norway is not a member of the EU. By gaining a foothold in the EU, Norwegian will be able to offer many new international routes in the future.

“It has taken far too long for DOT to fulfil its legal responsibility and approve NAI’s application. Our vision is that ‘Everyone Should Afford to Fly’, and it is a principle we intend to continue with, also with Norwegian Air International and flights between the US and Europe,” says Kjos.

Today, Norwegian has two bases in the U.S. It employs 300 cabin crew members in Fort Lauderdale and New York, and is currently recruiting American pilots at its New York pilot base. Of the 300 cabin crew, for which Norwegian received more than 7,000 applications, the vast majority had previously worked for U.S. airlines like Delta, American and United, and chose to join Norwegian for the pay, benefits, working environment, as well as the chance to fly brand new Dreamliner aircraft.

Norwegian Air Shuttle ASA, commercially branded “Norwegian”, is a low-cost airline listed on the Oslo Stock Exchange. Norwegian is the second largest airline in Scandinavia and third largest low cost carrier in Europe. More than 20 million passengers fly on its network per year. Norwegian has a route portfolio that stretches across Europe into North Africa and the Middle East, as well as long-haul flights to the US and Southeast Asia. The company has a total of 417 routes to 126 destinations and employs approximately 4,500 people in Norway, Sweden, Denmark, Finland, Estonia, UK, Spain and Thailand. The company has 258 undelivered aircraft on firm order. Norwegian was founded in 1993 and its headquarter is in Fornebu, Norway. In 2013 and 2014, Norwegian was voted Europe’s best low-cost carrier of the year by the renowned SkyTrax World Airline Awards. Norwegian offers better leg room than most competitors, in-flight WiFi, world-class punctuality and a fleet of 100 aircraft with an average age of only 4.8 years. 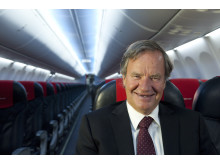