- For the third month in a row over 1 million passengers chose to travel with Norwegian. It is inspiring to experience such vote of confidence as these September figures demonstrate. It is therefore particularly pleasing that we have been able to offer our passengers even lower fares than last year due to the lower price of oil, says CEO Bjørn Kjos.

- September was also the first full operating month for the start-up destinations Molde and Haugesund, two strategically important domestic destinations in Norway. The reception of the new Norwegian routes have been above our expectations at both destinations, says Kjos.

The load factor for the Group was 77 per cent in September, a one percentage point decrease from last year. In September 2009 the Group operated 99.9 per cent of its scheduled flights, of which 87.7 per cent departed on time. 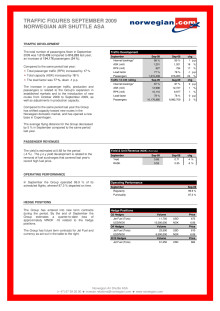